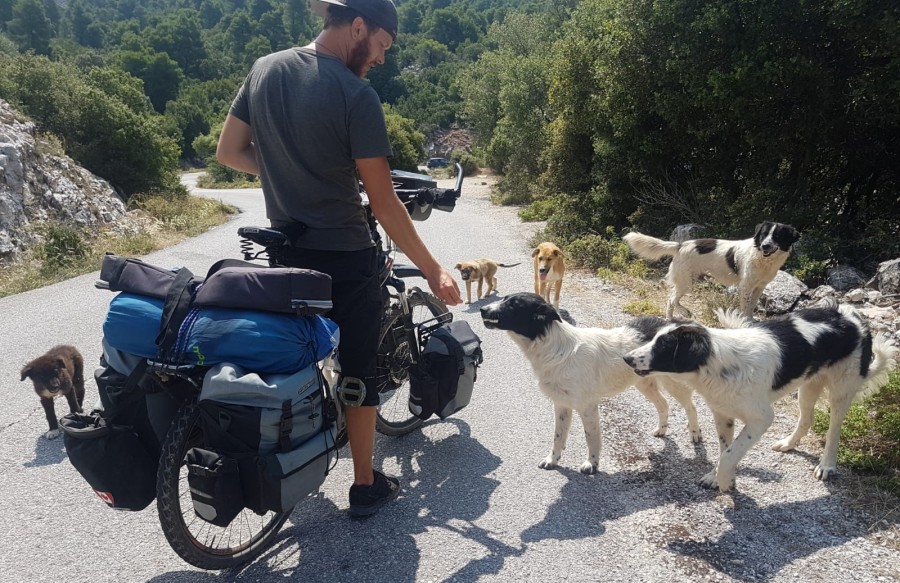 So you’re planning a bicycle tour that will take you through countries that are known to have stray / feral dogs. What should you do in such an encounter? Before my trip I read many horror stories of people being chased by packs of dogs, being bitten, or having to defend themselves in some way or another. In this article I will talk about my own personal experiences and give you some advice based on those encounters.

For reference, the trip from which I will be discussing was a 5000KM ride that would take me through countries such as Croatia, Serbia, Romania, Bulgaria, Macedonia and Greece. I visited many more on this tour, but these countries are known for their stray populations.

I think firstly I should state that if you have an uncontrollable fear of dogs, or you will not be able to remain calm should any number of strays give chase or be aggressive towards you, then you should perhaps avoid touring through those countries. All the advice in the world will be useless if you panic.

I did not carry any means of self defense, nor would I have wished to. If you approach the circumstances in the same way that I did then you probably wont need to either. If carrying a stick will make you feel safer and will help you keep calm during an encounter, then carry one. But please, please don’t use that stick as a first resort. Dealing with dogs in a friendly manner will make it safer for the next cyclist that comes along.

It is the responsibility of the rider (you!) to research the route you plan to take and note the wildlife/stray populations you make encounter and prepare yourself accordingly.

During my travels I encountered too many stray dogs to count. I would not be exaggerating if I say they numbered in the hundreds. I was growled at, barked at and chased by a sizable handful of them, but I was never bitten and I never had to out-run any of them. In fact I ended up making friends with most of them.

Stray dogs are also more territorial and it’s in their instincts to protect their space.

Thirdly bicycles are pretty quiet as far as modes of transportation go – the dogs may not hear you approach. So what happens when you sneak up on a scared, territorial animal that loves to chase things?

The first thing I do – almost without fail – when I am approaching, being approached or can hear commotion from dogs is to give a typical friendly whistle. Nine times out of ten this will make their ears prick up and can change their behavior from assertive to curious. It alerts them to your presence and it is not a threatening noise. (Also if a dog was previously owned and has been abandoned they may recognise a whistle.) Usually this is enough for them to see you’re not a threat. Be patient and they will lose interest in you if you ride on.

If the dogs are being vocal, continue their approach, and you cycle away, then they will probably give chase. Dogs like to catch the things they chase and they do not have hands with which to do so. They use their mouths, which have teeth.

If a dog did aggressively chase me as I attempted to ride off I would slow to a stop. If you’re afraid of their barks then this will be easier said than done. Your fight or flight instinct will tell you to bolt as fast as you can. IF you can out-run the dog then great. If not then the dog will want to catch its prize.

The safest bet in my eyes is to stop. Not once has a dog continued to run at me once I was no longer moving, no matter if the dog was alone or part of a pack. They just want to asses the situation and determine if you’re a threat. In most instances the dog(s) will continue barking and approaching until they are a small distance, maybe 10-15 feet away from you. Then they will begin to turn their bodies away from you but still bark. Give them some time, be patient, and they will likely lose interest and walk away on their own accord.

If you feel unsafe once you’ve stopped or the dog doesn’t behave as expected and walks right up to you, get of your bike and put the bike between you and the dog. Most of the time this will be unnecessary though. The dogs – especially hungry strays – will want to conserve their energy and avoid conflict. Remember, you’re in their territory. If some loon cycled through your back yard, you’d probably want to know whats up too. Again, the dogs will likely lose interest and walk away. There’s no need to shout at them, shoo them or engage in any other aggressive / threatening behaviour, and please don’t throw anything at them. Not only will it be unhelpful to the situation, its just not nice.

If the dog(s) are making you really uncomfortable or will not leave, bait them with some food. Show them it, throw it where they can see it, but far enough away to make your escape. Be patient though, I’ve never had to do this as they have always lost interest If they don’t want to be your friend. If you’re not a threat to the dog, they’re probably not going to be a threat to you.

Let them be your friend!

The easiest way to prove to a dog or group of dogs that you’re not a threat to them or the pack, is to try and be their friend!

Once you’ve stopped, get off your weird metal horse and get down to their level. Offer them a hand to sniff, diffuse the situation. This is single-handedly the best piece of advise I can give. Dogs have been bred down from wolves and domesticated to be ‘Mans best friend’ so let them be! Heck, go one step further and carry some dog treats If you know your going to come across strays. The only problem is this may lead to them following you for other reasons…They will want to come with you!

It may not always work. Some dogs just want to be left alone and some dogs have been treated so poorly they don’t understand that not every human is out to hurt them. Those dogs are best kept at a distance and with any luck my advice will aid that reality. At the end of the day you are responsible for your own safety.

This tour was documented fairly well, and I scoured through my pictures in an attempt to find a picture of an ‘aggressive’ stray dog to use in this article. Even the dogs that barked and chased me had floppy ears, big tongues, and – believe it or not – wagging tails when they realised I was not a threat….
Look! :

And thats only a small glimpse at the amount of ”aggressive” stray dogs I met!

When you hear the term ‘stray’ or ‘Feral’ dog, you may envision snarling, rugged beasts, frothing at the mouth and attacking anything that moves. I cant blame you, thats exactly what thought before setting off on this trip. I’d met people that carry sticks or advise keeping some rocks handy. But my experience taught me otherwise. Be patient with these misunderstood, unloved and scared animals. Please don’t throw rocks at them because they’re wary of you. I will repeat – You’re in their territory, they have no real home. Be as loving and patient as you can be. It will be reciprocated.

Having a small understand of canine behaviour can help you determine what kind of situation you are in and how best to react to it. Here is a quick crash course;

Watch for the dogs tail – If it points straight up, even if it appears to be ‘wagging’ It is a wary or defensive position. Paired with barking the dog will be angry/defensive.

If the tail is straight down the dog is anxious or fearful. Paired with growling indicates the dog is prepared to fight.

If the tail is upright but appears more relaxed and the dog is down on its front legs/front legs are bent, this indicates a playful position.

If the tail is in a more neutral position, neither up or down, the dog is relaxed.

Pay attention to the ears – If the dogs ears are forward, it means that the dog is curious.

If the ears are flat back against its head it represents fear or aggression.

Look at the eyes – If the dog breaks eye contact, it is actively avoiding confrontation.

A dog holding eye contact or staring can be a sign of challenging what has their attention. If their eyes narrow while staring, this is an aggressive stare.

Eye contact works both ways. If you’re unsure about about the dogs behaviour, avoid prolonged or direct eye contact.

Raised hackles or back hair – This is not always a guaranteed sign of aggression. The hair on a dogs back can also raise if it is startled, excited, aroused or fearful.

Dogs barking – The way a dog barks can tell you a lot too.

One / two sharp and short barks at a mid-range pitch: “Hello there!”

Continuous, fast-paced barking with mid-ranged pitch: “Call the pack! Is this a problem?! Someone is in our territory!”

Barking in rapid succession with a few pauses at a mid-range pitch: “I suspect a problem or an unwanted intruder, we should look into it.”

Prolonged barking, with longer gaps between each bark: “Is somebody there? I’m not a threat, wanna be friends?”

A stuttering-bark at a mid-range pitch: If a dog’s bark is spelled “ruff,” a stutter-bark could be spelled “a-ruff.” It means “Let’s play!”

A single, sharp, short bark with a higher pitch: “What’s this?” or “Huh?” This is a startled / surprised bark. If repeated it can be to alert the pack to a new event.

An aggressive dog will have minimal gaps between each bark and they will be deeper in pitch.

– Dogs love to chase things
– You’re in their territory
– Bicycles can be quiet and scary
– A friendly whistle can disarm them
– Dogs wont chase that which doesn’t move
– Be patient
– Use your bicycle as a barrier
– Distract them with food
– Make friends!
– Don’t throw things at them or be aggressive.
– Assess the dogs behaviour, not all barks are threatening!
– Be patient!
– It is your responsibility to research the route and prepare yourself

I hope this information paired with my experiences will help you to be able to understand and negotiate stray dogs better on your future adventures.

Patience and understanding really is key.

More tips and tricks can be found here!

Check out My Adventures to read about my travels and other experiences!

11 thoughts on “Dealing With Dogs”