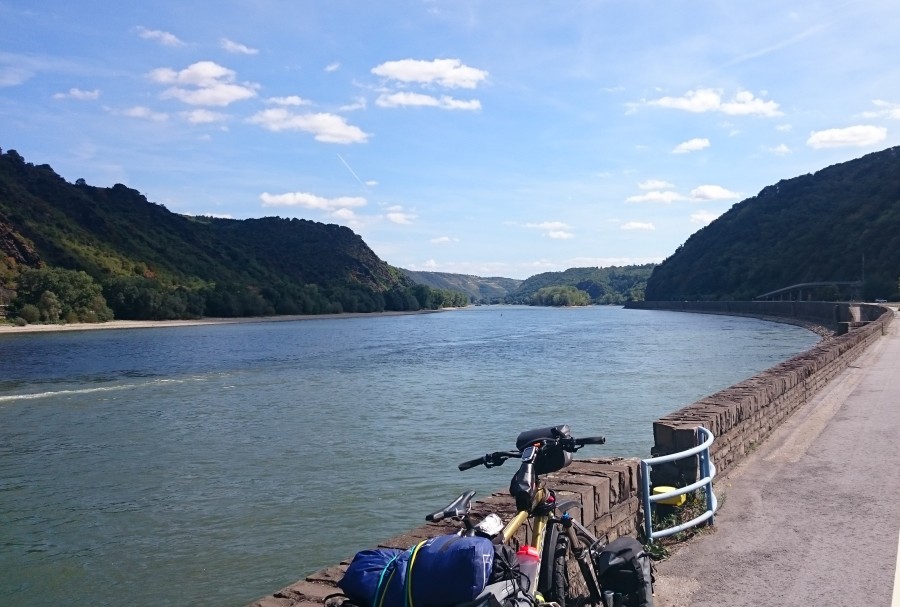 The last few days were wonderful and awful at the same time. The sun and scenery had been on top form as I leisurely made my way along the Rhein. I’d been shade bathing under trees, enjoying beers by the water, exploring WWII relics and had hiked to a castle. I even witnessed a fellow camper stealing my shower gel by squeezing my bottle into his. I hadn’t been able to enjoy it as much as I should though, my air mattress was leaking causing terrible sleep. At first it was not so bad, I just woke up in the morning with a temporary sore shoulder. But after multiple nights it deflated faster. I was essentially sleeping on the ground after 90 minutes, so I was a little grouchy.

I’d been feeling pretty down the last day or two. A mixture of lack of sleep and home sickness with a sprinkle of cycling into a headwind. I had been spending a lot of time with my thoughts and as much as I was enjoying myself, there was a small part of me in that moment, that would have liked to share the experience with a friend. A few phone calls home perked me up. The people back home enjoyed hearing from me, and I from them. Besides, how could you stay sad around views like this.

Of course the blue skies can’t last forever. The hills could not remain so lush and green without frequent precipitation. Clouds took their positions and dominated the skyline, growing darker and darker until the sky was saturated. I was at a campsite in the city of Mainz, attempting to fix my air mattress with superglue and duct-tape, when the rain drops fell.

I took cover under a cooking shelter in the centre of the pitch. As the rain gathered pace I was soon joined by the two other cycle tourists in the campsite. I had assumed none of us wished to be stuck in our little tents all afternoon. David, Karina and I were all on cycle tours, each going our own way, and we spent the afternoon talking bikes under a not-so-waterproof shelter until the rain died down. David was American. He flew to Germany, rented a bike and was on the last few days of a three week tour of the country. Karina was a competition cyclist, cycling 100 miles (160km) a day just for fun…

Later that day when the rain had stopped and returned again, I heard David calling me outside my tent. I opened the door to see him in his full waterproof gear, bike ready to go, holding out a book and a bar of chocolate. He had decided to set off in the pouring rain, but not before sharing his reading material and sweet-toothed reserves with me. I was very grateful to have some entertainment in the afternoons gloomy weather. Not going anywhere in the rain I enjoyed some chocolate and started reading the book. Waiting for nightfall as my air mattress slowly deflated underneath me.

Tomorrow I would turn off the Rhein and Join the river Main, cycling upstream towards Frankfurt.

I cycled the 25 miles (40km) to Frankfurt in the company of Karina, but it was obvious I was slowing her pace quite dramatically. We wished each other good luck and off I went to unload my gear and find a camping store. I was in dire need of some better sleep, though I would barely get any that night. Another camper pitched somewhere close by, snored with such ferocity that even earplugs could not muffle the noise. At least someone was sleeping well.

I stayed for a few nights around Frankfurt. I explored the city a little, caught up on sleep with a new camping mattress and fought off a short lived illness that gave me chills and headaches. I was surrounded by wasps at every meal and I had also promised myself on my next bicycle trip I would bring a camping chair. My knees were not big fans all of this saddle and floor business.

Feeling rested and recovered I moved on from Frankfurt. Drawing ever closer to the destination I had set for my first bicycle tour.